BE A WARRIOR FOR YOUR DREAMS

WE FIGHT FOR WHAT IS CLOSEST TO OUR HEARTS

Lili Fournier is a renaissance woman whose powerful personal success programming has brought her recognition as a leading pioneer in advancing the human potential movement.

Lili Fournier hosted, produced and directed the award-winning Quest specials which blazed a trail on PBS stations, airing for over a decade. Her visionary leadership and leading-edge work opened the airwaves across North America to spiritual programming challenging the conventions of the mind-body-spirit paradigms. 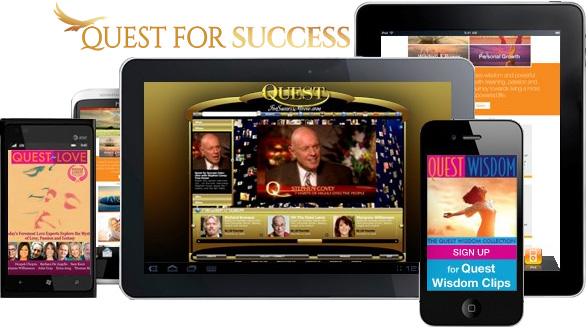 Critically acclaimed as the best of its genre for its in-depth approach to contemporary life issues, the Quest featured some of the world’s most influential spiritual and business leaders and best-selling authors on how to achieve success with significance.

Lili has been a dreamer and a fighter all her life.

She has learned a thing or two about risk and adversity and what it takes to achieve big goals, spending decades setting and achieving one major break-through after another and rising to the top of her field in several careers including Television, Film, Investment and Residential Real Estate, as a Lifestyle Columnist for the Sun and a Real-Estate columnist and in her retail enterprises, which included Toronto’s finest gourmet shop.

As a child she experienced man’s inhumanity to man firsthand, when her parents fled a communist regime where she faced intolerance only to do it all over again when they became immigrants twice over again. The American Dream and the promise of Freedom burned bright in heart as a child. She was always told ‘you can’t, you’re a girl. She always answered “Yes, I can”. English was her fifth language by the time she was ten. She learned early about how painful it is to bear the brunt of prejudice, to not belong, and committed herself to fight for justice and equality when she grew up.

After a couple of decades of a successful career as a cog in the wheel of making television and films, first blazing a trail as Canada’s first female Assistant Director (with Ilona Herzberg)  she went on to work as a Script Supervisor on TV series, movies and  feature films for ABC, Universal, Showtime, Paramount, Global, CFTO, et al, and as an Associate Director, from live concert specials to major multiple-camera dramas. Bernard Shaw’s Pygmalion with Peter O’Toole, for 20th Century Fox and Astral – was her all -time favorite drama and favorite star. He was as wild as she was. They got on like a house on fire.

In 1992 she pulled off an impossible feat, having just learned about the By My Spirit Concert and Global spiritual gathering 3 months before. She ended up producing the Television event, actually saving it. She invested her own funds to secure a 9-camera mobile unit and the best crew in Spain. Two global events in Spain including the Olympics made equipment scarce. Funds came through at the last hour for the concert.

Right before the Reconciliation ceremony at the synagogue in Madrid, with room for only 300 dignitaries from around the world, as the King of Spain and the President of Israel were ushered, and as the door was closing, the Chairman held out his hand to Lili who was filming on the red carpet with her crew, and said “Mrs. Fournier, won’t you join us”. Such a moment of respect, she will never forget. This was a historic 500 year commemoration of the Jews Expulsion from Spain and a tribute to peace and co-existence lead by Nobel Peace Laureate, Eli Wiesel. Everything she cares about. 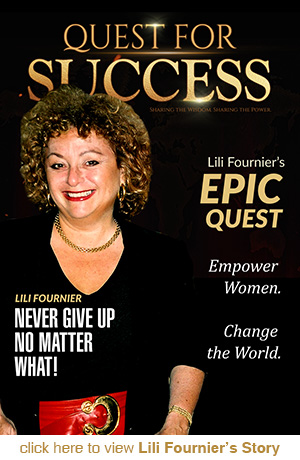 After she got knocked off a flight to India that was blown up by Terrorists, she made a VOW in gratitude for getting to raise her children that she would make “Television that matters” and she set off to make her own shows, and started the Quest. Always ahead of her times, she was rejected endlessly. Her life-changing programs were eventually seen by millions of viewers for over a decade, successfully raising millions for PBS’s fund-raising efforts. She started with 12 markets on PBS, and worked full out for years to expand syndication to reach 90 million households across the U.S., also airing on 6 Canadian networks and in Europe and Israel. That’s how passionately committed she was to inspire people to go for their dreams. She always felt that personal change was the key to fostering positive social change.

It’s great to be #1. A trusted leader in personal development. In its vanguard study on Mega Trends in America, the leading Ad Agency of the time, Chiat Day (Apple’s Think Different Campaign) cited Spirituality and chose the Quest, published by Simon & Schuster as the best product in the U.S. marketplace. The Quest also became the best selling video off the air on broadcast television in Canada.

WOMEN OF WISDOM AND POWER - A PASSION TO RE-IGNITE THE FEMINIST AGENDA . After airing her award-winning 3 hour WOWP specials on PBS, plus a 2 hour live studio broadcast from New York, she was flooded with stories from women across the U.S. who said the shows lit a fire for them and gave them the courage to go for their dreams. Realizing the immensity of what this meant, Lili felt a sense of urgency to re-ignite the feminist agenda. Convinced now of the huge power media had to make social change, she dedicated her life to the education and empowerment of women. Funding was vastly inadequate for women and girls. She decided to do something about it.

International Women's Day was not well known in North America at the time. She decided to put it on the map. The TV broadcast showed women gathering in every city worldwide on this day, their voices growing stronger every year. If it wasn’t quite true, she felt it would become so the more women heard it. The shows aired prime time in 28 of the top 30 markets across the U.S. The message was flowing across the airwaves. You see, the World March of Women marched in over 170 countries on March 8, 2000, and it barely made the news. She was outraged that something so significant for women would not make it to air. When they did it again in 2005 she invested a great deal of time and getting up and down planes to make sure all the networks knew about it and it still did not make it to air at all. It’s as if it never happened. She was outraged.

The Secret of Lili Fournier’s Success. When asked, she said it was her “incredible perseverance, her willingness to take risks and her courage to keep trying over and over again”. She continued on to say that she used to say “that if you believe it, and you can see it, then you can achieve it”. However, now she would temper that by saying there are powerful cultural forces at play that do not support your success. After one success after another, it was still extremely challenging for her to get access to capital for her next documentary. Why is that? So the issue of capital for women’s economic empowerment is huge.

As an inveterate adventurer who had traveled to over 80 countries around the world with her Gerard for 14 months when they just got married, she had lived amongst women in the grassroots. Yet until then she had not realized that it was the severe subjugation of women in most parts of the world that kept poverty in place. She is renown for her grit and perseverance and never giving up on a goal. Her next Vow was that she would produce Women’s Day Live. A live global multi-venue benefit concert that would build an annual sustainable fund-raising and global advocacy platform to help accelerate unprecedented investment in the education and empowerment of women and girls worldwide. 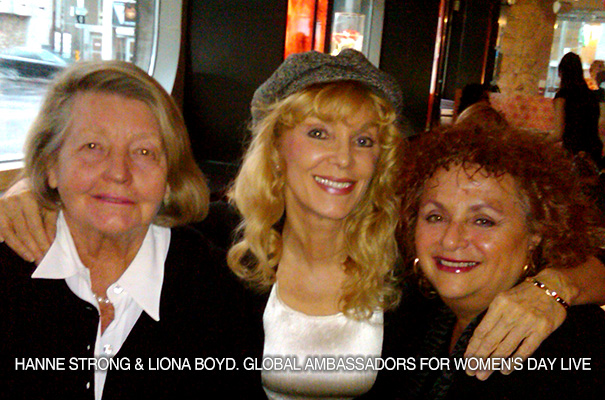 "Lili Fournier's passionate and courageous commitment to the cause of women's global empowerment despite the challenges over the years with launching such a bold and ambitious vision like WOMEN'S DAY LIVE is simply unbelievable and a real inspiration. She just simply will not give up until it happens".
- Liona Boyd

Lili shared her Women’s Day Live mission with President Clinton who invited her to make it a CGI commitment. As well as with Katie Telford, the Chief of Staff for Prime Minister Justin Trudeau who just made a historic investment in women. She supported her bold vision too.

Lili always felt that the education of women was the key antidote to the assault on the pillars of democracy she saw coming after 9/11. So she set about trying to wake women up to their power to be ready for what she knew was going to be the fight of our lifetime. That’s why she couldn’t stop her mission. She also predicted this severe global humanitarian crisis and did everything in her power to be ready to respond with Humanitarian Aid. She has the dream and the team and is ready. She is known to say that spiritual maturity demands that we care about helping others and understand our human inter-connectedness. Her commitment to Equality and Social Justice has fueled her staying power and the personal sacrifices she’s been called to make for the future benefit of humanity.

The Evolution of Power. Power is not given. It needs to be claimed. Women are claiming it now. 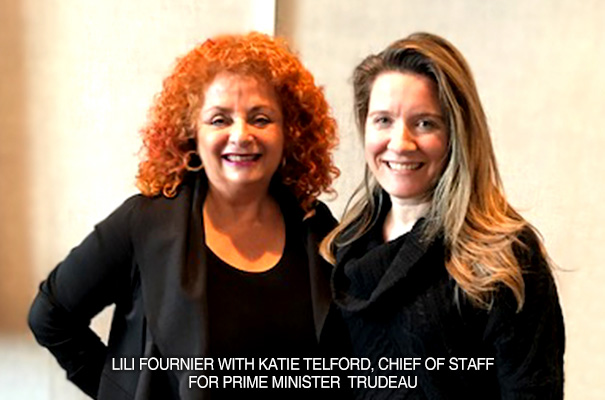 This is a threshold moment in time, a wakeup call for all women to step up to the plate with everything they’ve got. Women must realize by now that they have enormous collective power. Vote power. Dollar power. We have to choose courage over comfort and be willing to do what it takes. Now is the time to use this formidable momentum for real systematic change. Transformational change. The future  is in our hands. The stakes could not be higher.

Her Epic Quest to realize this dream for the world’s women and girls is now legendary. She is always all in. Always giving all she’s got and more. As is her incredibly generous heart. She has spent twelve years of her life dedicated to launching this Heart in Action Global Humanitarian Campaign, coming close and far.

Lili's gone the distance. She has  a world class Emmy award winning production team ready to produce the Benefit Concert to open the heart of humanity to the plight of women and children and help feed the hungry. Funds are needed now, to be ready to air on March 8, 2021 around the world.

AS ROOSEVELT SAID,
“ETERNAL VIGILANCE IS THE PRICE OF FREEDOM”.

"We are at a critical tipping point in our human history. We all need to call on our courage to be fierce defenders of the pillars of democracy and freedom.

I have made vows which have tested my faith, my endurance and my will to the limit. Given that everything I value is at stake, who would I be if I didn’t take a stand".